riding the Northeast and beyond

Bish-Bashing Thru the Southern Berkshires 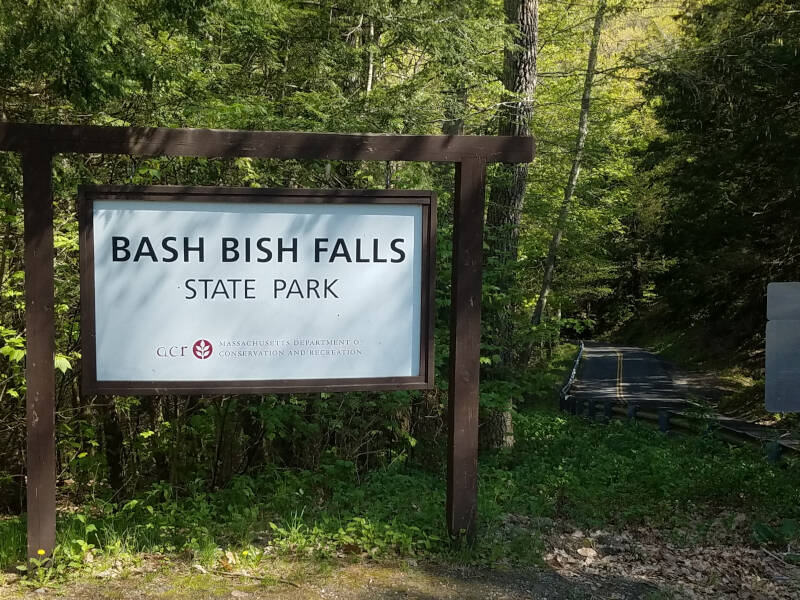 After several short outings after work over the past few weeks, the opportunity finally arose to get out for a full day of riding – my first in a few months. I decided to try out the NER Southern Berkshires ride, with some adjustments for a lunch stop in New Lebanon NY (though I do enjoy Barrington Brewery, which is the normal lunch stop for this ride). I put out some invites a few days ahead and my friend Gerry answered the call.

I left the house just past 0600 and enjoyed being out once again on the early morning highways with little traffic. Gerry met me at the Dunkin in Westfield MA at 0745 on his BMW R1200R and we chit-chatted over coffee. It was a beautiful morning with a clear sunny day in the 60s ahead of us – perfect riding weather, we both agreed. After a quick fill-up at the nearby station and connecting our Sena headsets, we headed west out of town, enjoying the wide sweepers on US 20 along the Westfield River. We picked up MA 23 in Russell and enjoyed several miles of fun curves, continuing south on MA 8 to Sandisfield.

Here we were to pick up MA 57, the road I anticipated least on this ride, due to it’s poor surface condition over the past few years. In fact, the road was now under construction, completely scraped bare of pavement for several miles west from the intersection and due for paving this very week. Not having many close-by alternate road options in this part of the state, we decided to just stick to the route. Despite having to keep the speed down a bit for traction, the road was actually smoother without pavement than how I remembered it! Shoulda snapped a couple pics, but I wasn’t in pic-taking mode at the time.

Hitting pavement again, we enjoyed more curves on MA 183, winding through the foothills and down into the Housatonic River valley. We cruised though the small village of Sheffield on US 7, missed our turn, circled through a few neighborhood side streets, and picked up our trail again, heading west and up into the Taconic range. We went north on MA 41, then circled west and south on East Street, the only paved road in from fMassachusetts to the isolated hamlet of Mt. Washington, third least populous town in the Commonwealth at about 130 souls. 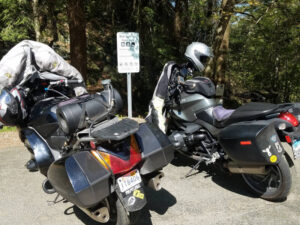 Continuing out of town on West Street (see the pattern there?) we enjoyed more great riding into Bash Bish Falls State Park, which straddles the border with New York, and crossed over the Appalachian Trail where it follows the ridgelines north toward Vermont. 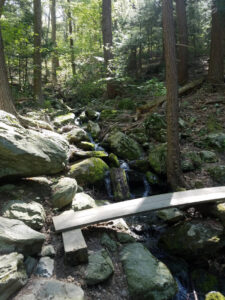 I’d never been to see these waterfalls and was hoping for a good mid-springtime flow. We pulled into the first parking area we saw, with only a few other cars there and it felt good to get off the bike for a stretch. I had heard there was a short hike to get to the falls, and it was a steep one, winding down rocky wooded singletrack, knowing every step down was one we’d be sweating back up in our MC pants and boots. Ah well, good practice for rally bonus hunting! 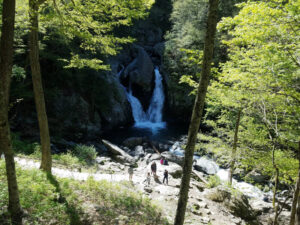 Bash Bish Falls are the highest series of cascades in Mass, and they were flowing well today. Though I’d seen many snapshots of the falls, I wasn’t expecting them to be so large. There were more visitors than the number of cars in the lot suggested and we realized that there was another parking lot and trail coming in from the New York side, possibly with a flatter hike in! Oh well, the twin cascade was absolutely gorgeous and the cool mist refreshing after our hike down. The place must get packed on the really hot days. 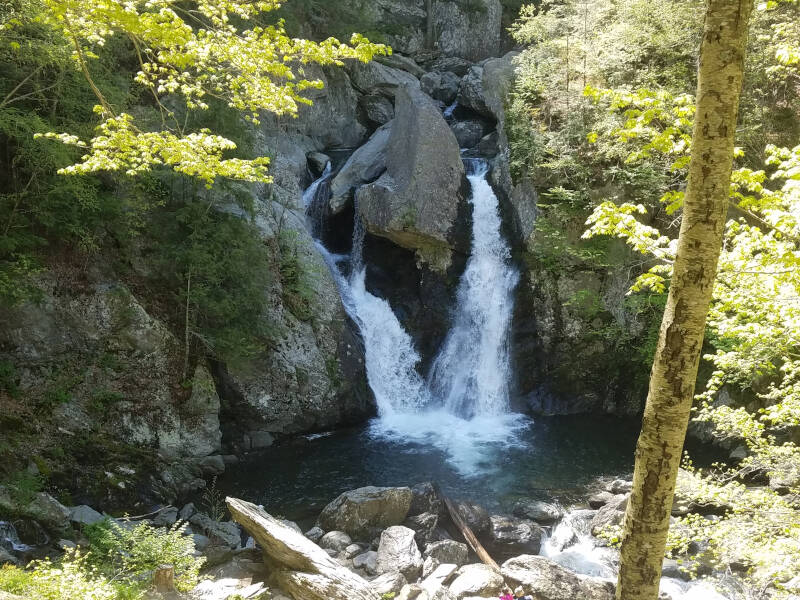 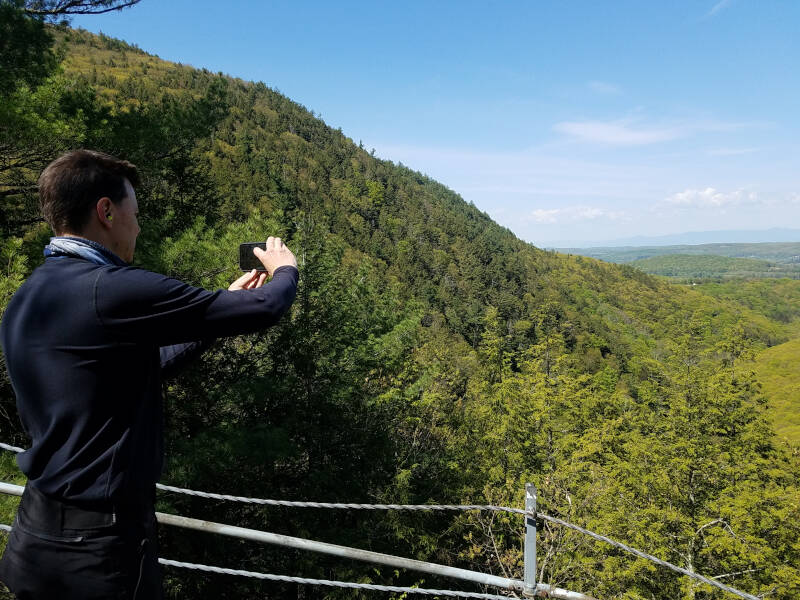 After taking in the beauty and snapping a few shots of the falls and clear pools below, we began our hike back up the slope, talking about rally experiences past. When the trail got close to the road, we decided to bushwack straight up to it and cut out some of the more rugged terrain.

We trudged the rest of the way up the road to the lot, where we drank some water and noticed a trail sign to a scenic view on the knobbly hilltop above the parking lot. Gerry had never been up there either, so we went up the short trail and were treated to a nice view of the westward-facing basin emptying into the Hudson valley region. Must be a great foliage spot in the fall! 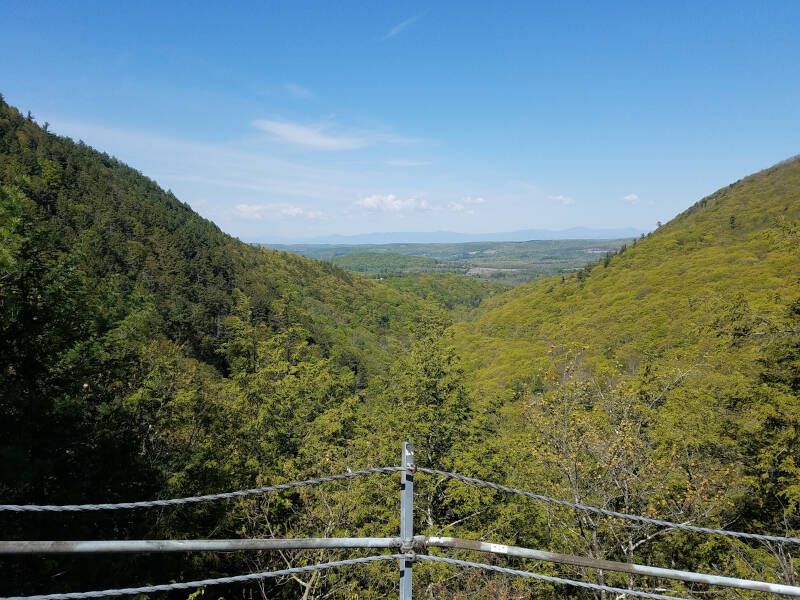 We got moving again in short order, stopping in briefly at the NY parking lot for the falls, where there were many more cars parked. Apparently it’s a 3/4 mile walk in from here, but I’ll bet it’s a nice walk along the brook. Continuing down out of Taconic State Park, we passed through the village of Copake Falls, where a rail trail runs by a nice looking little deli store – someplace to try next time. Turning north, we rode some nice rural roads back up to route 23 to cross back over the state line and then up through the towns of Egremont and Alford. We crossed into NY again to pick up NY 22 north over I-90 and up to our lunch destination in sleepy New Lebanon. 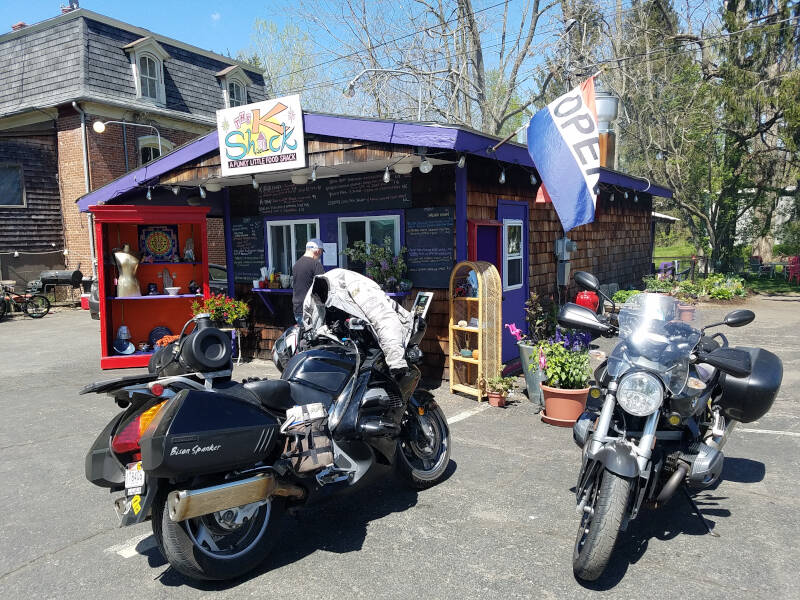 The K Shack sits just off US 20, next to a weekend farmer’s market. I’d seen past RTE events held here but had never had a chance to try the place out. I’d mistakenly assumed it was a barbeque shack, but they actually serve an eclectic mix of various freshly prepared foods, including veggie options.

I opted for some boneless ribs and coleslaw along with the tartest lemonade I’ve ever drank. The food was tasty, though on the pricey side, but the atmosphere was perfect for such a fine spring day, with a few picnic tables out on the grass that we pretty much had to ourselves, with the infrequent sleepy whoosh of cars passing on route 20 just down the street.

Following a leisurely lunch and good conversation, Gerry and I mounted back up and took 20 east towards Pittsfield. Remembering my previous frustrating experiences passing through this city, I’d mapped out a few side roads that took us by the municipal airport and avoided the center of town. That worked out pretty well.

We joined MA 8 south and enjoyed the riding down to pick up 20 again in Becket. We blasted through the sweepers of Jacob’s Ladder Scenic Byway for a few miles, through Chester to Huntington, where we zig-zagged north a good 10+ miles on River Road, before looping back around to the east and then south on MA 112. These two roads had us whooping and focused on the road for a good half hour, before spitting us out at the Huntington Country Store (another place to check out in the future).

Gerry was running close on fuel so we detoured off route to find a station on nearby 20. We found a nice little gem called Carrington Road to get us back on route and enjoyed the final curvy miles south through Montgomery and back into Westfield. 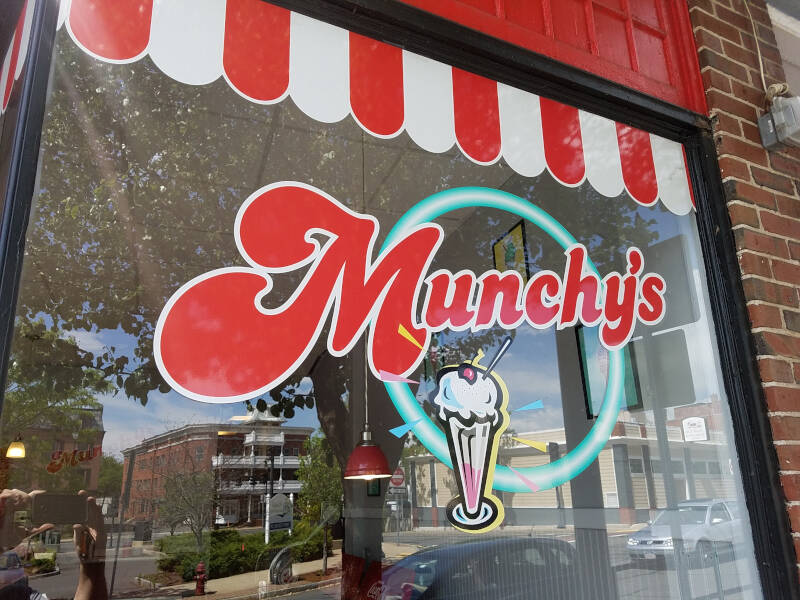 I’d happened upon Munchy’s Malt Shop while searching the Westfield area for ice cream places and had decided to end the ride there, as I love a good malted milkshake. Tucked onto the main drag next to a magnificent old depot building that now houses the local chamber of commerce, there was plenty of parking up the little side street in the lots behind the adjoining tattoo parlor and in front of the depot. 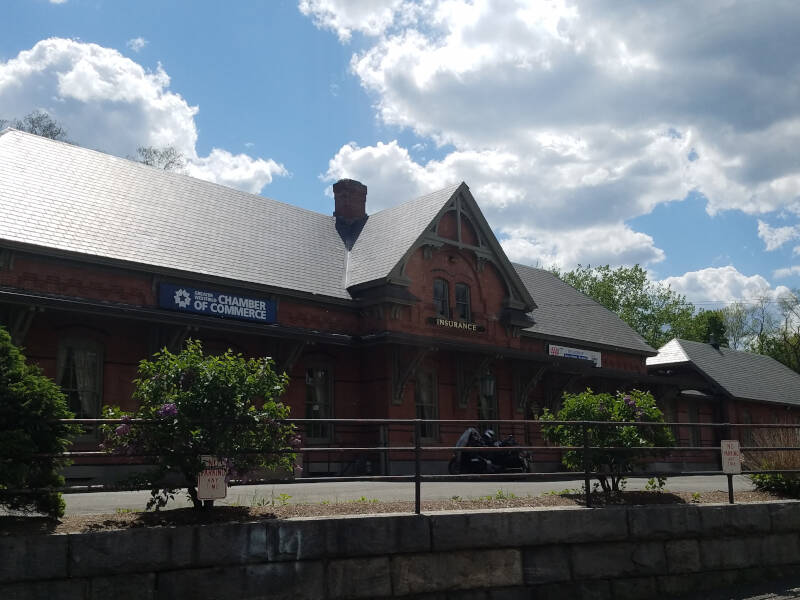 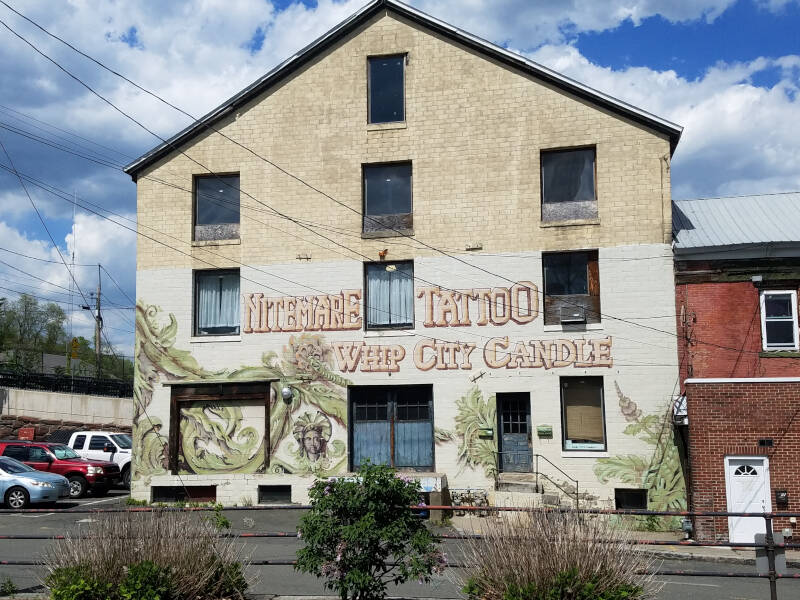 I took a peek through the front windows at the retro-themed little spot. They appeared to be open for indoor dining, though the interior was small and it was empty at the moment. We ordered from the side window and learned from the young lady that Munchy’s had apparently just re-opened after closing the business back in the fall due to the pandemic. The black raspberry malt shake hit the spot after a great day of riding, while we watched the wind swirl tree seedlings around the depot parking lot. 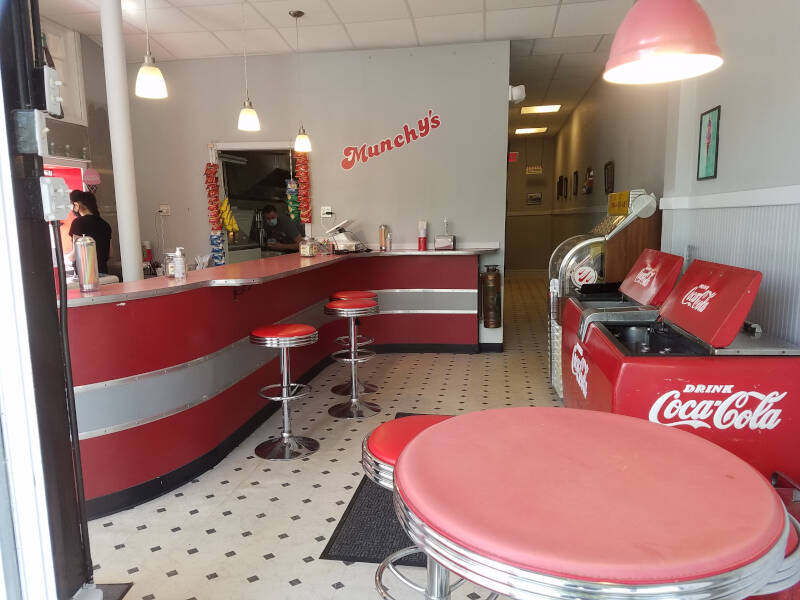 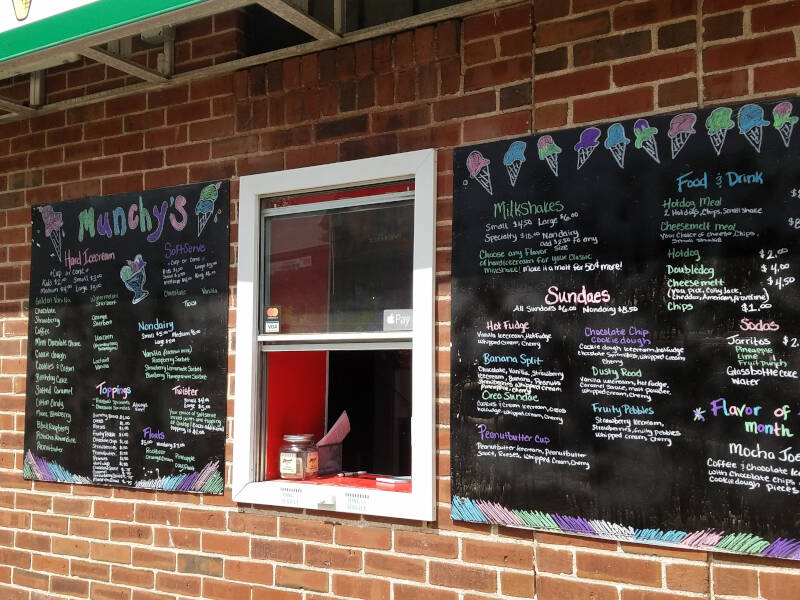